The Department of Justice (DOJ) told the Republican-led House Judiciary Committee on Friday “it may not always be possible” to comply with the committee’s investigative requests.

“While we will work diligently to accommodate requests for public testimony, it may not always be possible to participate or to address all the topics the Committee wishes to raise,” Carlos Uriarte, the assistant attorney general for the Office of Legislative Affairs, wrote to committee chair Rep. Jim Jordan (R-OH) in a letter obtained by Breitbart News.

Republicans’ requests “must be weighed against the Department’s interests in protecting the integrity of its work,” Uriarte noted.

The DOJ foreshadowing an inability to fully cooperate with the committee comes after Jordan contacted the department this past week, in his first communication since becoming committee chairman, to formally request documents, communication, and testimony from numerous DOJ officials.

Jordan’s requests pertained to the committee’s investigations into DOJ’s handling of certain parents attending school board meetings, its role in the southern border crisis, its raids on Mar-a-Lago and Project Veritas employees’ residences, its implementation of the FACE Act (the Freedom of Access to Clinic Entrances Act), its execution of January 6 investigations, and other concerns about “alleged politicization and bias.” 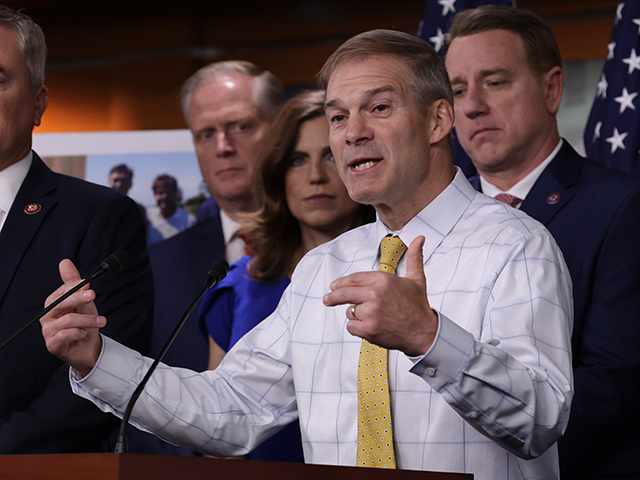 The committee also now houses the newly created Select Subcommittee on the Weaponization of the Federal Government, a powerful panel with a high budget and broad purpose of investigating alleged civil liberties violations by government agencies, including the DOJ.

Jordan will chair the subcommittee, which was established via congressional resolution this month with no Democrat support. The Ohio Republican is expected to conduct some of his DOJ investigations through the subcommittee once Speaker Kevin McCarthy (R-CA) appoints members to it.

The resolution “authorized and directed” the subcommittee to investigate the executive branch’s investigations, “including ongoing criminal investigations.”

DOJ’s correspondence Friday, however, signals the two branches of government are heading for an impasse as the committee — and the new select subcommittee — seek to satisfy their oversight obligations.

“Longstanding Department policy prevents us from confirming or denying the existence of pending investigations in response to congressional requests or providing non-public information about our investigations,” Uriarte wrote.

The Judiciary Committee responded in a post on social media Friday asking, “Why’s DOJ scared to cooperate with our investigations?”

Why’s DOJ scared to cooperate with our investigations?

Jordan, who has served on the House Judiciary Committee since joining Congress 16 years ago, has made clear through his correspondence to DOJ that he will resort to issuing subpoenas if necessary to obtain the documents, communications, and testimony he has requested.

“Republicans aren’t worried about anything when it comes to DOJ’s letter,” a source close to the committee told Breitbart News, adding that “it won’t distract or obstruct anything in the slightest when it comes to their oversight of the department.”