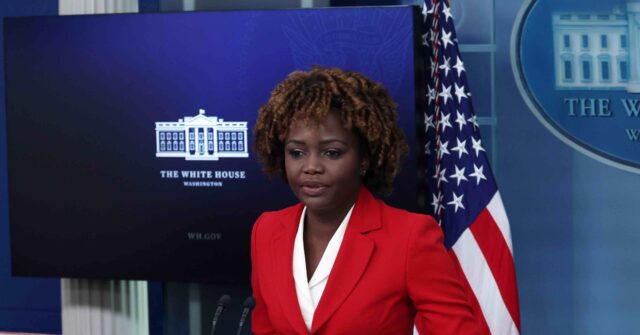 White House Press Secretary Karine Jean-Pierre misled reporters on Friday when she suggested President Joe Biden was just visiting his beach home as usual, when in fact the Department of Justice was searching his residence.

On Saturday, the White House revealed that the Department of Justice had “conducted a comprehensive search of the president’s Wilmington residence” and found six additional documents with classified markings. The search had been conducted in the presence of President Biden’s personal attorneys, as well as White House counsel. (In contrast, former President Donald Trump’s lawyers were not permitted to observe the search of his private residence when the FBI raided it, ostensibly looking for classified documents.)

President Biden did not go to his Wilmington home on Friday, but rather to his house in Rehoboth Beach, Delaware. When asked about the apparent deviation in Biden’s travel plans, Jean-Pierre was elusive and suggested that the president was simply traveling to his beach house — despite mid-winter conditions — as on other occasions.

Q    And one last really quick question.  The President going to his home in Rehoboth Beach today — does that have anything to do with classified documents being found at Wilmington and none being found at Rehoboth?

MS. JEAN-PIERRE:  So, as it relates to classified documents, information which the President takes very, very seriously — and you’ve heard him speak to it when he was asked by your colleagues yesterday when he was traveling in California — I would refer you to the White House Counsel Office for any statement coming from here or — or anything — new developments coming from here.

As it relates to his travel, as you know, he often travels to Delaware on the weekends.  I just don’t have anything else to share.  But anything related to the legal process, I would refer you to the White House Counsel Office.

The White House has previously suggested that prior searches, conducted by Biden’s personal attorneys with the approval of the Department of Justice, were complete and that no further documents remained to be found.

Last Tuesday, Jean-Pierre was asked in the White House press briefing whether it was “safe to assume” that all of the classified documents in Biden’s unlawful possession had been found. She did not answer but said that the White House was “cooperating fully” with the Department of Justice, and reiterated that the administration would not “interfere” with the administration of justice (though is has arguably done so on previous occasions).

Journalists have begun voicing their frustrations with Jean-Pierre, who has repeatedly given them incorrect information about Biden’s classified documents, though she has blamed statements from the counsel’s office.

Joel B. Pollak is Senior Editor-at-Large at Breitbart News and the host of Breitbart News Sunday on Sirius XM Patriot on Sunday evenings from 7 p.m. to 10 p.m. ET (4 p.m. to 7 p.m. PT). He is the author of the new biography, Rhoda: ‘Comrade Kadalie, You Are Out of Order’. He is also the author of the recent e-book, Neither Free nor Fair: The 2020 U.S. Presidential Election. He is a winner of the 2018 Robert Novak Journalism Alumni Fellowship. Follow him on Twitter at @joelpollak.