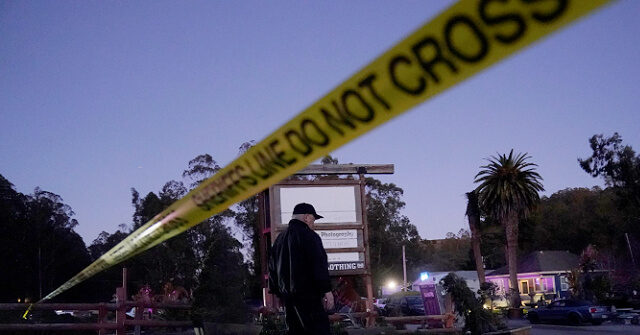 Sixty-seven-year-old Zhao Chunli was taken into custody after seven people were killed in shootings on two separate farms in Half Moon Bay, California, Monday.

Breitbart News noted initial reports, which indicated four were dead and three were wounded as a result of the shootings.

However, ABC 7 now reports that seven were killed and one is wounded.

A suspect is now in custody in the Half Moon Bay shootings. Here’s the intense moment it happened – caught on video by our @abc7newsbayarea camera pic.twitter.com/1ZGcLh8Byz

SMC Sheriff’s Office has confirmed A 67-year-old man named Zhao Chunli has been arrested for a shooting in Half Moon Bay, where at least 4 people were killed. It is possible that there are more victims at another location.#halfmoonbayshooting pic.twitter.com/RXd8qi0nk0

ABC 7 reports that Chunli worked on one of the two mushroom farms and that all the shooting victims were Chunli’s coworkers.

On June 5, 2022, Breitbart News reported California was number-one in gun control and number-one in “active shooter incidents” as well.

The FBI indicated that California led the nation in “active shooter incidents” in 2021.

AWR Hawkins is an award-winning Second Amendment columnist for Breitbart News and the writer/curator of Down Range with AWR Hawkins, a weekly newsletter focused on all things Second Amendment, also for Breitbart News. He is the political analyst for Armed American Radio and a Turning Point USA Ambassador. AWR Hawkins holds a Ph.D. in Military History, with a focus on the Vietnam War (brown water navy), U.S. Navy since Inception, the Civil War, and Early Modern Europe. Follow him on Instagram: @awr_hawkins. You can sign up to get Down Range at breitbart.com/downrange. Reach him directly at awrhawkins@breitbart.com.